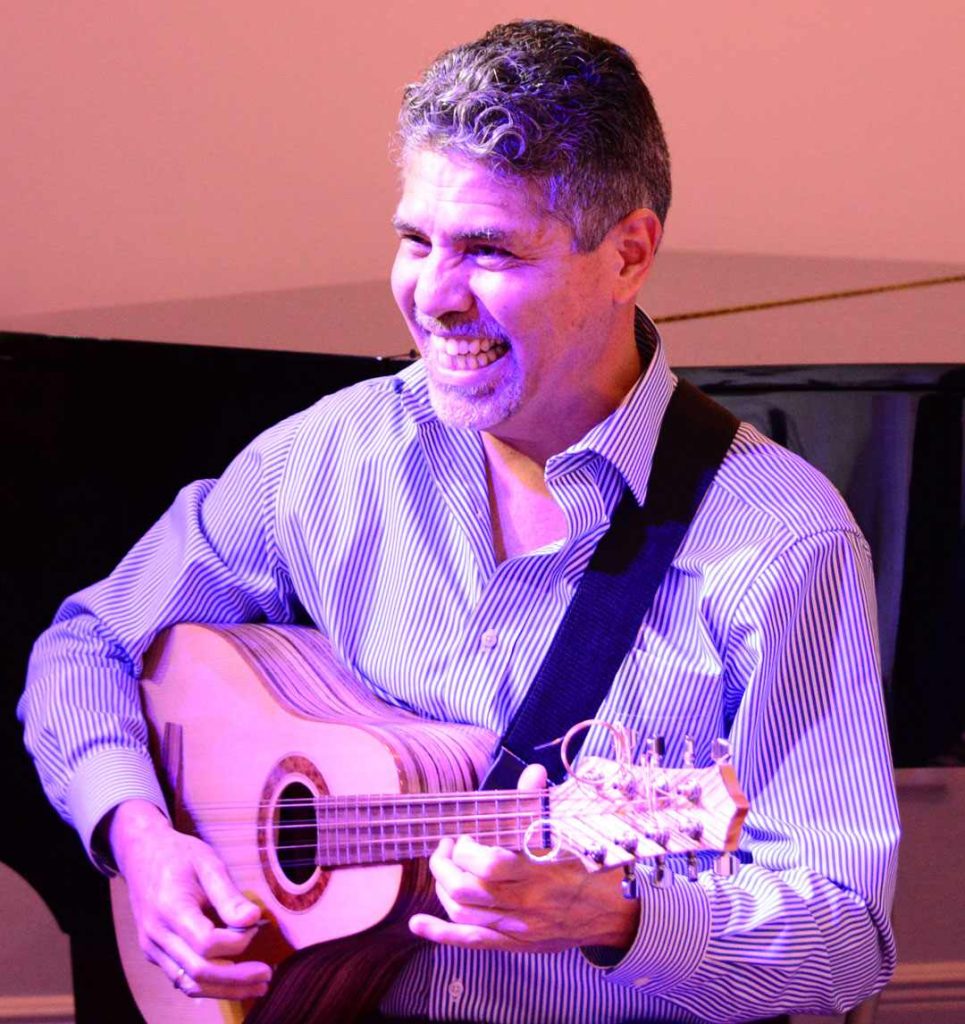 Saúl Vera was born in Caracas, Venezuela. Among many notable achievements, Saúl is a world-class composer, arranger, teacher as well as a master Bandola and Mandolin player. He is a musical director and arranger with great knowledge and experience in both traditional and Venezuelan folk music. Since 1986, he leads his own successful musical project called: “The Saúl Vera Ensemble”. One interesting fact is that Saúl has had the rare opportunity to study and play music from both an academic and a traditional approach.

Today, Saúl is a sought-after performer who has participated as a soloist and has also been an invited artist to numerous national and international events and concerts. He has shared the stage with other great musicians such as Chico Buarque, DJavan, Zimbo Trío, Paco de Lucía, Ray Barreto, Gilberto Gil, and Michel Petrucciani.

In 1994, Saúl was awarded the “Premio Proyecto Eco” by Mozarteum Foundation and the “Casa Miranda” award in London to further his musical research and develop new works in England. Saúl is also the author of the landmark book “Techniques for learning Bandola Llanera” Ed. Fundarte, 1993.

In 1997 and 1998 Saúl and his ensemble toured Europe playing important venues in Bonn (Germany), Rome, Paris, Geneva, Bern, Montreux (Switzerland), and Brussels (Belgium). The tours were a great success and resulted in excellent newspaper reviews with great accolades from the critics.

In 1999 Saúl Vera recorded a very popular Compact Disc “TOCANDO TIERRA” which included performances with Bela Fleck, Alex Acuña and Abraham Laboriel. This CD was in such demand it was distributed throughout the Americas.

In November of 2000, Saúl again toured in Germany, playing the World-wide Expo-Hanover 2000, again to great press reviews. In August of 2000, Vera released in Caracas his “Concert for Bandola Llanera with Orchestra”. Saúl performed with the “Gran Mariscal de Ayacucho” Symphony orchestra, and again in 2001 with the “Venezuela Symphony Orchestra”.

In the summer 2002 Saúl Vera was invited by The Nature Conservancy organization to perform concerts in United States in Washington D.C., Cleveland and New York.

In 2004 within his international program he made concerts at the “Bolivar Hall” in London and at the “New Morning” in Paris, one of most important jazz venues of the French capital, in which Saúl Vera shared the stage with the consecrated Martinican piano player Mario Canonge, among others.

In 2006 Saúl Vera celebrated the 20th Anniversary of his musical project “Saúl Vera Ensemble” and was received in the most important Concert Hall in Venezuela, the “Aula Magna” at the “Universidad Central de Venezuela” by the “Orquesta Sinfónica Municipal” from Caracas under the direction of Rodolfo Saglimbeni. That same year, Vera embarked on a four-city musical tour in Austria, sharing the stage with Venezuelan singer Eugenia Mendez, on a tour that culminated at Joe Zawinul’s Birdland Hall in Vienna.

From 2005 to 2009, Professor of “Venezuelan Folk Music Level I and II” and Venezuelan Music History at the Institute of Musical Studies (IUDEM now called National Experimental University of Arts).

From 2005 to 2009, Professor of Chairs Bandola Llanera, Mandolin, Venezuelan music for Ensembles and at the Music Conservatory Simón Bolivar, National System of Youth and Children’s Orchestras of Venezuela ( “El Sistema”). Caracas.