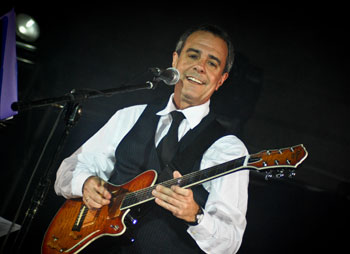 Pedro is a renowned music industry professional living in Weston, FL. Born in Cuba and raised in Venezuela, Pedro has been considered a musical icon in the Venezuelan music business for more than three decades. During his career, he’s had the opportunity to work with many of the best musicians and advertising agencies both domestically and internationally. If that wasn’t enough, he’s also been invited to perform on the same bill as artists like Roxette, Roger Hodgson, XTC, Saga, Fito Paez, Ricardo Arjona, Yes, Kansas and Roger Waters.

Pedro runs his own recording studio, in which he has produced his latest albums and created several memorable campaigns for the advertising industry.

Pedro’s experience as a teacher, speaker and performer has allowed him to develop special communicational, technical, and teaching skills. Having been invited as a speaker to several seminars of music and advertising.

Pedro has been working with computers since he discovered the Atari ST, then, the Mac 512, and so on, until the last generation computers and software.

Fluent in Spanish and English.