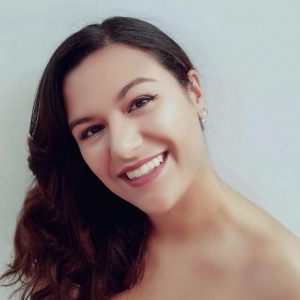 Orianna Gutierrez was born and raised in Miami, Florida and is a Vocal Performance Major at the FIU School of Music. Her love for music surfaced at the age of 5 when her parents signed her up at Kids Village Performing Arts Center. There, she began to explore the arts such as dancing and singing and thus found her passion. As the years progressed, she found herself performing in school choirs, bands, and theatrical productions. in 2017, she performed in the FIU production of Il Matrimonio Segreto as the role of Elisetta. in the Spring of 2017, she traveled to Cuba with the FIU Concert Choir to perform Martin Palmeri’s Misa Tango. She is also the Soprano Section Leader at St.Johns on the Lake in Miami Beach.

The method of vocal technique I studied in college is a mixture between different pedagogical school . Since I received training in a mix of techniques I don’t have a specific name for it, but the closest thing I can think of is Bel Canto technique. The idea is that maximizing the use of breath support is the main objective in order to produce rich and beautiful sounds. I teach my students to constantly rely on their breath support and to feel very grounded in their posture in order to maximize their success. I’ve learned breathing both ways, tucking in the belly or expanding the ribs, and I provide my students with both techniques and let them choose which one feels most comfortable to them since both can be successful when done correctly. I also emphasize in my teachings that singing and speaking go hand in hand and both should receive significant breath support at all times.

Another facet of Elisa is her career as a Publicist. For decades she has been a spokesperson for several important brands, including: