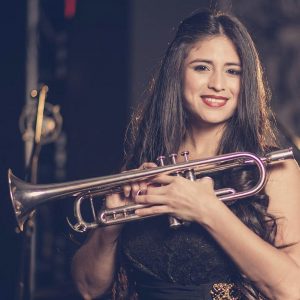 [dropcap]K[/dropcap]issis Muñoz
Trumpet
Born in Maracaibo-Venezuela, she began her studies at the age of 9 years with her father Duber Franco in the Marching Band Nuestra Señora de Lourdes, after 2 years she entered the Conservatorio de Música José Luis Paz in which she began her orchestral practices in the Orquesta Infantil José Luis Paz until 2002 when she joined the Orquesta Juvenil José Luis Paz where she was able to perform as the First Trumpet for 3 years.

In 2005 she becomes a member of the symphony of Zulia and at the end of that year she won her audition for the Orquesta Sinfónica de Maracaibo where she was able to do solo concerts such as the concert for Trumpet and Orchestra Haydn, concert for trumpet of Alexander Arutuniam and the concert for 2 trumpets of Vivaldi, in that orchestra she got to perform as principal trumpet until 2009.

In May 2010 she moved to Caracas to follow her musical preparation at the Latin American Academy of Trumpet performing recitals and receiving master class from important teachers such as Francisco Flores, Gabor Tarkovi, Max Somerhalder, Rolf Smedvig, Spanish Brass among others and at the same time she was part of the Orquesta Sinfónica Teresa Carreño where she made several tours for Europe. In 2013 she auditioned to belong to the Sinfónica Municipal de Caracas and the following year she participated in the Latin American Trumpet Competition Eric Aubier in Colombia where she became a semifinalist, in 2015 she continued her musical studies graduating from the Royal Schools of Music obtaining the Bachelor’s Degree Instrumental Execution.

She currently lives in the city of Miami performing as a trumpet player in the Miami Symphony Orchestra, the Miami Brass Quintet, MAKE Sound and in different orchestras and groups where she has been able to explore different musical genres playing with renowned artists such as Oscar de León, Luis Enrique, Tony Succar among others.
[/accordion_toggle]
[/accordion]