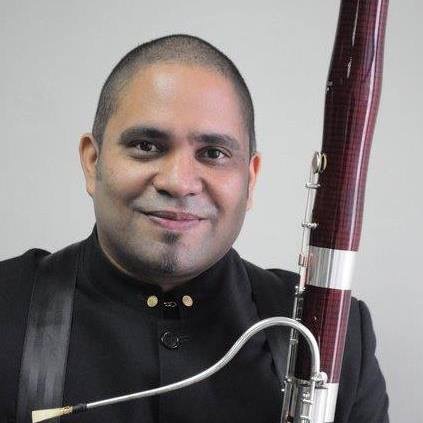 With the Trio IROMA 3 he has worked closely with the most distinguished Venezuelan composers. This creative relationship has led him to perform world premieres for reed trio and for solo bassoon. He has also performed the Venezuelan premiere of countless works for trio and for solo bassoon by composers such as Jean-Francois, Gordon Jacob, Malcolm Arnold. F. Mignone, E. Pfiffner, and J.Balissat

Since 2003, he’s been in an active exchange of ideas and experiences with the international bassoon performer and teacher Stefano Canuti, who, through his work in Venezuela, has had a significant effect on the teaching and performance of bassoon in the country. Since 1996, he has dedicated himself to instructing woodwind workshops, master classes, and performances as a soloist in Venezuela and other countries such as Guatemala, Colombia, Brazil, Peru, México, Costa Rica, and Chile.

Mr. Bravo has also been part of the prestigious Academic Octet of Caracas and, from 1998 to 2010, was a Professor at the Conservatorio Superior de Música Simón Bolívar.

He was Bassoon Soloist of the Venezuelan Symphonic Orchestra from 1997 to 2014.

He is currently participating as Principal bassoonist in Miami Symphony Orchestra

Geronis has also been dedicated to popular songs and other musical instruments: Drums , cajón , soprano, alto and tenor saxophone, as well as the bass guitar.