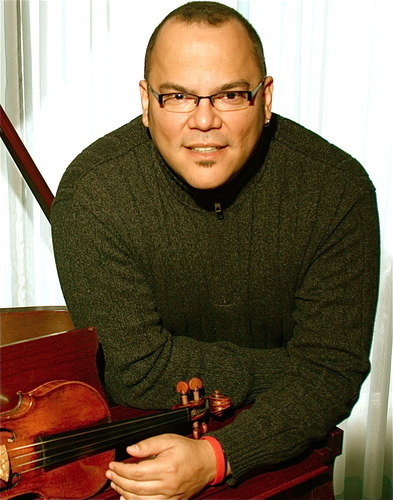 [/custom_frame_left]
[dropcap]J[/dropcap]esus Florido, Violin. Artist in Residence.
Born in Venezuela from Italian ancestry and living in the U.S since 1989, Jesús Florido has established himself as a very versatile musician. His training in the classical tradition has given him the perseverance and work ethics that are necessary to succeed in the music world. His teachers have included Eligiuz Stoiñsky, Larry Shapiro, and Davis Brooks. He also received consistent instruction from Joseph Gingold, Margareth Pardee and Dorothy DeLay. In addition to classical violin performance, he also has studied Afro-Cuban, Jazz, Rock, and Fiddle music, which – combined with his Latin American roots – has produced a unique and eclectic vision of music interpretation.
In light of his diverse background it is not surprising that his list of musical influences is unusually varied, incorporating composers and performers such as Bach, Beethoven, Mozart, Grapelli, Hendrix, Ponty, Shankar and Santana. These influences have fueled a passion for musical experimentation and motivated Mr. Florido to utilize both acoustic and electric violins in his recordings and performances. American fiddler Mark O’Connor recognized him when he invited him to teach Latin-style fiddling and improvisation at his camps in Nashville and San Diego. 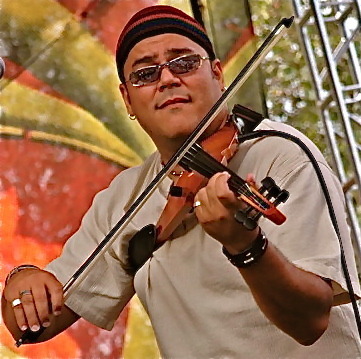 [/custom_frame_right]Mr. Florido has appeared on CBS Sunday Morning as part of Mr. O’Connor’s line-up of artists. As a classical player he has opted for a chamber music career with very successful results as a recitalist. His concerts in 2000 of the complete Mozart Sonatas are a performance highlight.
Sharing his music through teaching is an essential part of Mr. Florido’s daily life. As a founding member of the National System of Youth and Children Orchestras in his native Venezuela he started teaching at a very young age. A highly sought after teacher, he has conducted workshops and residencies in Venezuela, Brazil, Spain, Canada, Germany, Austria, France, Belgium and the US. “Music has to be part of every child’s development in the world,” he states.
Mr. Florido’s playing can be heard on many commercial recordings. His latest recordings include work with such artists as Nima & Merge, Healer, Dan Hicks and the Hotlicks, Gary Hoey, Voyeur, Delarge, Hattler, and Nicholas Gunn. He has shared the stage with a wide variety of artists from Zubin Metha, Pinchas Zukermann and Itzhak Perlman to Whitney Houston, Moody Blues, Robert Plant and Jimmy Page among many others. With his recent debut solo recording, Heading North, Jesús introduces a compelling artistry balanced on a fine axis of musical virtuosity and pure heart. “This album came about from what is not out there from an instrumental point of view,” he explains. “Jazz, rock, classical, Latin — my album is a true melting pot.” With his violin as a compass, Jesús Florido heads toward a limitless musical horizon.